The Mistress of Mercantile A Visual Codex of Silk Road Trade

This garment is 100% silk with hand-embroidered symbols of trade items. It took a year to create. The turban is decorated with two symbolic silk worm cocoons. There are multiple stories embedded in these symbols. The dress is tiered and the early trade items cascade from the waistline in seven layers. There is a train in the back with two oil barrels, bring us up to date with 21st century trade items.

Depicted are many silk embroidered trade items, which include: Textiles (silk, cotton, wool)were made into fabrics and carpets. Spices/Herbs both medicinal and culinary which include; nutmeg,pepper, rhubarb, turmeric, and ginseng. Dye Plants such as, saffron, indigo and madder root. Sea Products such as coral and pearls Aromatics were popular trade items and these include: frankincense, myrrh and rosewater. Skins, Leather and Furs came from the northern places such as Russia. Paper-making a Silk Road invention.

The vast network of trade routes were by land and sea. These routes stretched from Asia and the Middle East to Africa and Europe. The Baroque Period 1590-1725 includes the great trading powers: Chinese, Japanese, Ottomans, Venetians, Portuguese, Spanish, British and Dutch. 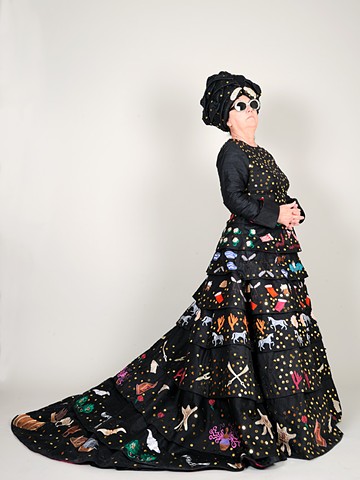